Yes we still always just contact in the streets, the members don´t help out to much right now, but hopefully little by little they will get more excited to help out and invite people to activities and church. Our investigators seem a little bit better now, we at least have a few that look like they should progress.
I´m glad that they´re going to broadcast priesthood session, because we were just planning on not being able to watch it here, because we can´t travel all the way out to our district center to watch it. We´re just going to watch on BYU internation TV here in the church.
We had district conference this week (yesterday), so we took a bus with like 20 members to the church building like an hour away. At first I was worried because the bus didn´t start for like 15 minutes, so we were late to pick people up to go, but we prayed and it started and we picked everyone up and were able to drive over and be to the meeting on time. The meeting was really long. They talked for 3 hours without any breaks or anything, and all of the kids there were getting antsy to go do stuff. It was long even for me after a while, but it was good. The district president talked, and so did our mission president and his wife. They challenged all of the members and everyone to read the book of mormon before christmas this year, so I´m going to have to get on that, because there isn´t much time left before christmas. It worked out well with timing though, because I´m just about to finish reading the book of mormon. It was a good conference and I was very glad that everything worked out with planning transportation and that so many members could go to the conference and learn there.
We also had interviews with the mission president this week. It was good to talk to him and learn some new stuff. It seems like president trusts me a lot from some of the things he´s told me, so it was good to hear that from him. 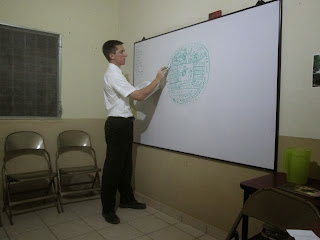 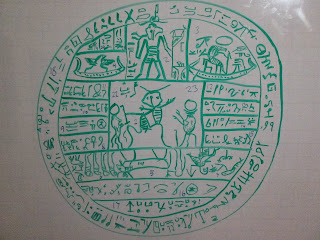 Also yesterday we had a deep doctrine class in the afternoon that I taught. I explained in depth the true meaning of Kolob as portrayed in the facsimile 2 from the Book of Abraham. I gave an analysis on the relation between the symbols of God and Heaven and Eternity and the Sun and things that go on in the temple as shown in the hieroglyphics. The only problem was that nobody came to my class, so I just drew the picture on our whiteboard for nothing. ;p No, just kidding, I didn´t give any class, but a couple of weeks ago I found a little like 30 page book here in the church about the interpretations of the 3 facsimiles in the book of Abraham and what they mean, it was really interesting. I learned a lot about the symbols from it, and so I was bored yesterday, so I drew it on the whiteboard when I needed a break from studying. It actually only took a little less than an hour, which is good for how good it turned out, given that I have little talent at drawing or art or anything. There´s a lot of symbols in it that are confusing to draw. So I thought that I would include a couple of pictures of that. :)