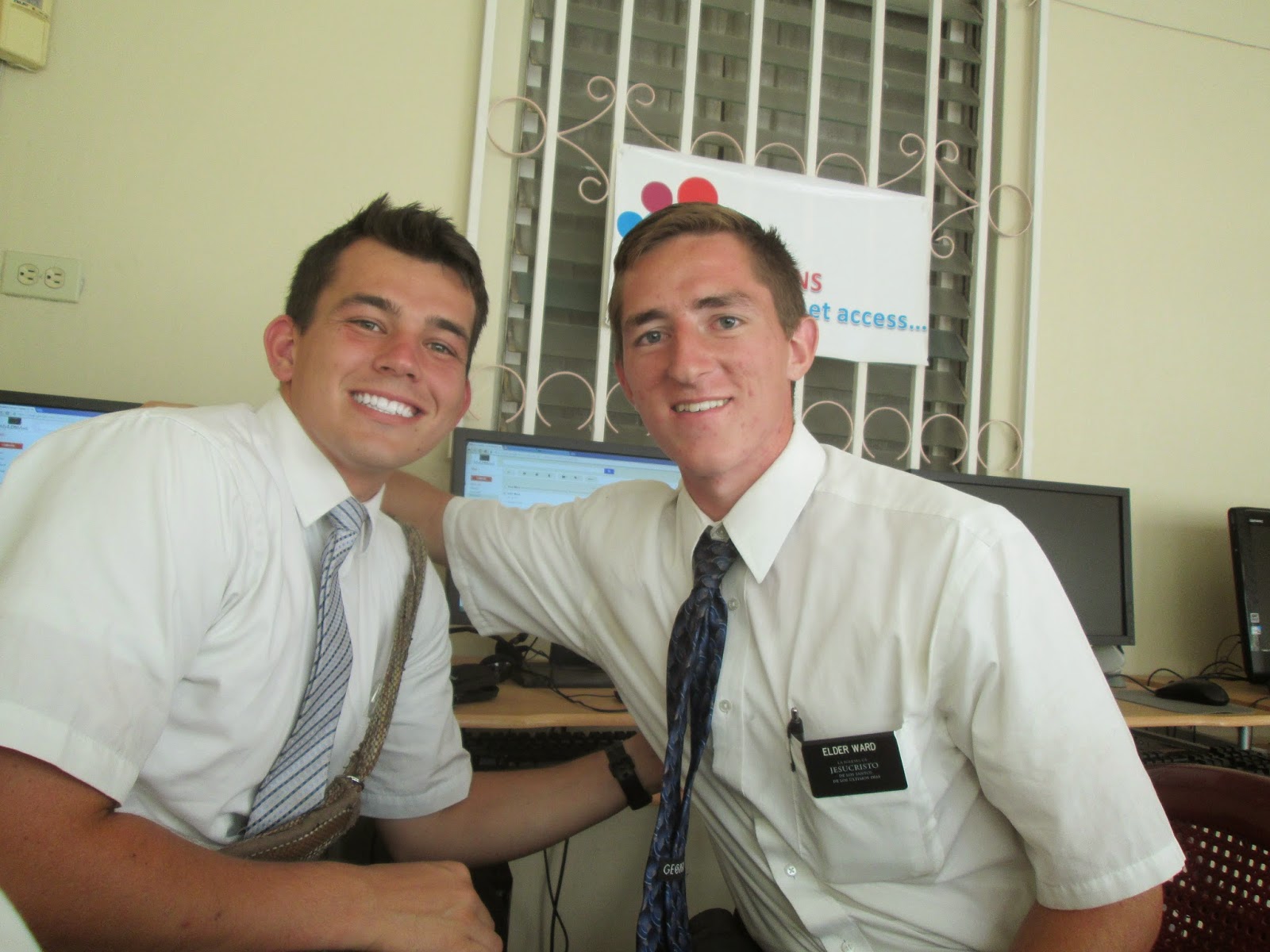 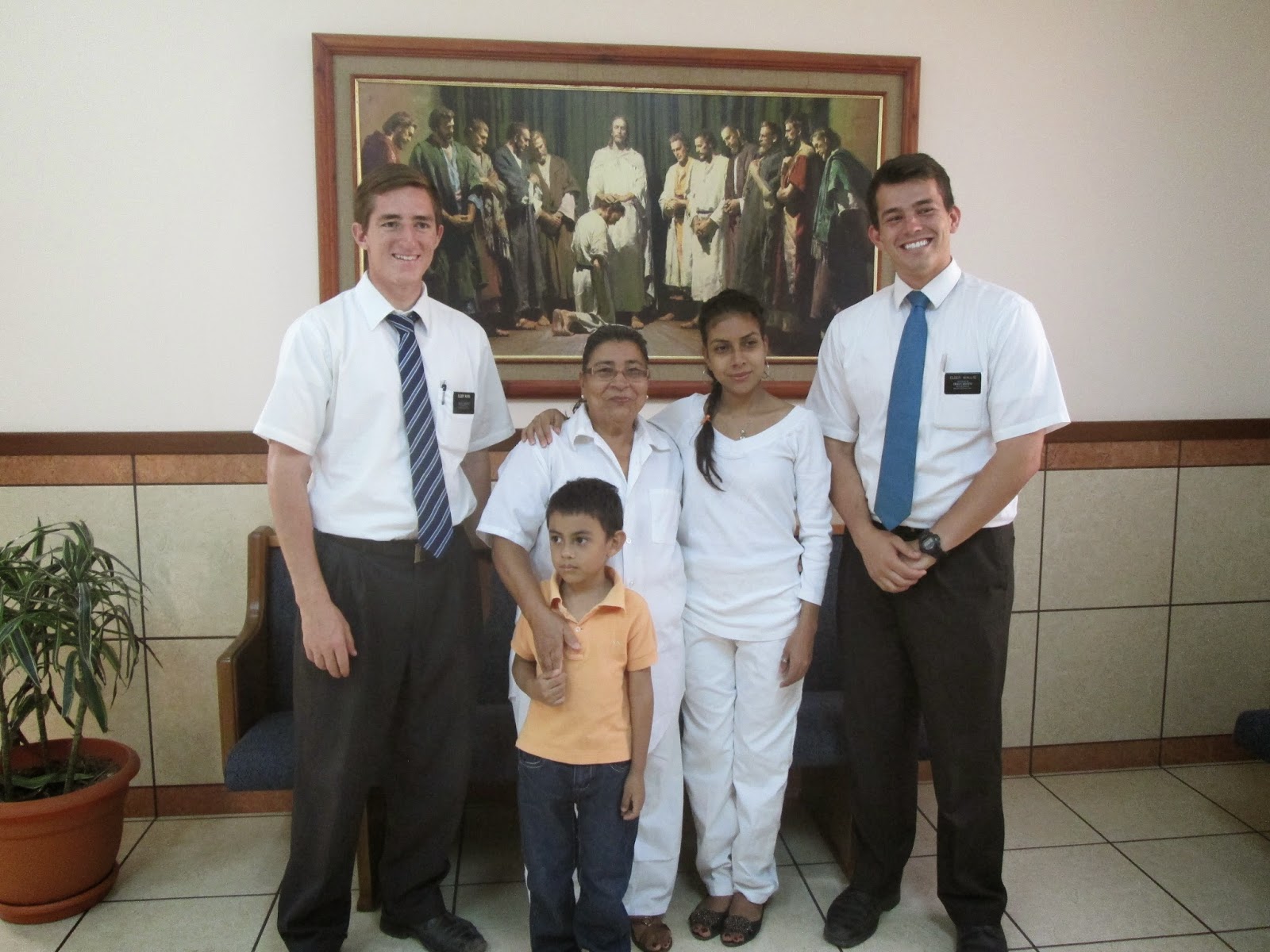 I have been sick this whole last week with Dengue fever. I´m not sure how that translates in English, but basically, since last monday I had been having a head ache. I´ve continued with more frequent headaches and then tuesday I had a bad fever. I rested in the mornings, but worked all I could in the afternoons for the first bit of the week, but then on Thursday, I was feeling pretty bad while we were working, so we came back and I called the mission nurse, and she told me to go to the hospital the next day to have an examination for dengue. So, the next day, friday, I went to the hospital, and everyone was on vacations for Semana Santa this week, so I had to go to emergency room and ask for the exam, and they did a urine and a blood exam and like an hour later, they came in and confirmed that I had dengue. So, once we found that out, I was told to stay in my house resting for the next 3 days straight and to take lots of liquids and gatorade and stuff, and we got some helpful medicine. So, the last few days, I´ve been trying to rest and chill so that I can get better, although saturday we had to go back to the hospital for a followup blood test, and we also had our baptism in the afternoon, so we had to go to that, and everything went well there, we had 2 baptisms this weekend, and they are super positive. Other than that, we´ve been hanging out at the house for most of the week. My companion has left me with a priesthood holder and left with another to go work a few times too, so that we keep getting our work done in our area, but it hasn´t been too fun to just stay home a lot right now. I don´t feel too sick or hurting or anything right now though, it´s only if I go out and work that I start feeling sick, and I also have to be careful because my body isn´t very strong to fight off infections and stuff right now. But hopefully I get better this week. But don´t worry, I´m doing fine.
Yes, today, actually, I got your easter package. Thank you, my companion and I will enjoy eating easter candy and making water balloons from the package of balloons to have a water fight on pday.
There´s not much to report other than that. Here´s pics of my new companion and I, and our baptisms this last saturday.
Love,


Elder Ward
Posted by Tiauna at 8:51 PM No comments:

to respond to the questions really quick, things are great in the new area, there is more work to do here than in any of my other areas, and we are always busy with appointments, so we hardly ever contact. We had 2 baptisms this last saturday (I don´t have a memory to USB converter right now, or I would send pics) and we had 9 investigators from our side of the ward come to church this week, plus all their young kids. This should be the most fruitful area in my mission. No, I don´t think that I´ll leave before the end of my mission, which is fine with me. I think that my companion will be leaving next change, and then I´ll get a new companion for the last 2 changes. It´s weird being in my last area and thinking that the end is kind of close, but I´m happy that we will stay busy working hard here. There are 2 types of people here, super rich people that live in gated communities (we also live in a gated community) and the poorer class, which is a lot of people who´ve moved from the deep deep jungle parts of honduras called the Mesquitia, and they have their own tribal language that my companion and I are trying to learn. It would be hard, but we just need to find a dictionary or a bible in mesquita so that I can learn new vocab words. We´ll see if I can learn it at all.
That´s it for now. If you could share this email with mom, I don´t have a ton of time to write to everyone today..
Love,


Elder ward
Posted by Tiauna at 8:45 PM No comments:

This week, we had changes, and I left Porvenir, Choluteca, and came to Guaymuras, Tegucigalpa, so I´m back in the city again. I´m happy to be in the city again, it was getting way too hot in Choluteca anyways. It is a good area here. The ward seems to be really good, and we´ve already had a lot of help from the members in teaching some great lessons. Even though a lot of people are really rich here, a lot of them are still willing to listen to the gospel when they have time. I´m still here as ZL, and my new zone is a lot smaller than my other zone, we have 12 missionaries, all Elders. We are all really close to each other, so it´s easier in some things. We have a good hardworking Ward Mission Leader too, so we do weekly coorelation meetings and everything, which is something I haven´t really done since I was in the city last like a year ago. This area seems really nice, we always get food from members, including sometimes double lunches or dinners. We also get rides from members too sometimes, which is weird to have rich members who help us too. I think that this area will be nice and we should have a lot of success here. I want to focus on baptizing a family before the end of my mission, because I´ve never had a whole family baptized.

My new companion has been with me since the beginning. He was in my MTC district, but we hadn´t really seen each other for a while on the mission, but now we´re companions, which is awesome because we´re good friends and he is a very hard worker and stays motivated. It´s weird to think that this will proabably be my last area and my second to last companion on my mission, but there´s still plenty of work to do here, so I´m happy that I´ll be able to stay occupied.

Thank you all for all of your support and testimonies. All of you have been great examples to me and have supported me to be here helping others.
Love,
Elder Ward